The hills of Coulin and Ben-Damph estates are south of Glen/Loch Torridon. There are 3 Munros and 5 Corbetts. They are approached by good stalkers’ paths from north or south (Glencarron). They vary in style and difficulty, but are all rocky hills made of the same sandstone and quartzite as the Torridons. They are near to the Moine Thrust (see Geology), and several show clearly the spectacular effects of this.

Here they are given in order from west to east.

A fine ridge, relatively easy to approach and to traverse and with fantastic views. The approach is from Torridon Inn through pine woods and up to a corrie and the ridge, mostly on a good path. The summit area is quartzite, but less rough than usual.

From the north, a formidably steep hill; it is usually climbed from the Lochcarron side, perhaps with its neighbour AN RUADH-STAC (892m), an equally steep hill. MCD gives a fine panorama of the Torridons to the north.

Highest and finest of these hills. Most climbers seem to approach from the south, combining it with its neighbour FUAR THOLL (907m) and/or Beinn Liath Mhor (below); but I prefer the northern approach, a fine ridge leading to the handsome summit.

End on, the summit is a sharp point, but in fact it is the end of a long ridge of alternating quartzite and sandstone (imbricated). It can be climbed with Sgorr Ruadh, although the link is complex. The area of lochs and crags to the north is worth visiting.

Each end of a broad N-S ridge, with a wonderfully complex area of sandstone and quartzite between them. Rough but rewarding walking! Sgurr Dubh is impressive from Glen Torridon, and also seen from far away on the A832 beyond Achnasheen.

Another place to visit…

MEALL DEARG (646m, red hill)  is not a high hill but a wonderful area of exposed Torridonian Sandstone NW of Sgorr Ruadh, easily reached by paths. Perfect for exploration on a sunny day.

(Below) Coulin hills from Meall Dearg 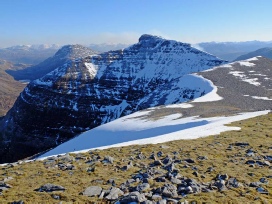 The ridge from the north end

The summit, at the south end 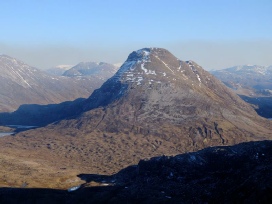 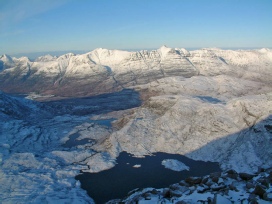 The view north to Liathach 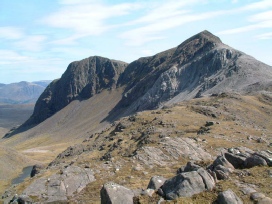 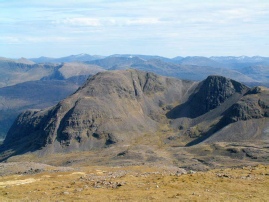 Fuar Tholl from the summit 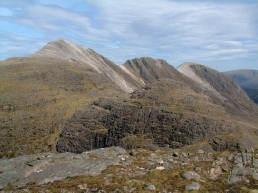 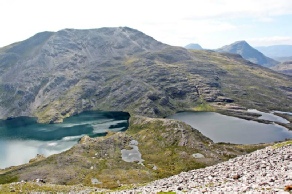 Lochs and crags to the north 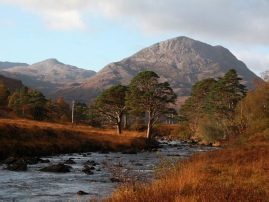 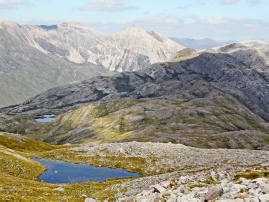 Sgurr Dubh from the glen; SNLU beyond

From SNLU towards SD, and Beinn Eighe