This is my favourite Scottish hill (I am far from alone in this opinion, but there are others who put An Teallach at the top!).

What makes it so special? It is not for the faint-hearted: from the glen it is intimidating (the ridge is seen a vertical kilometre above you); the other, hidden, side is even steeper. It creates wonderful views: of itself from the glen, the east end of the ridge, or the summit; and of the surroundings from anywhere on the ridge. Its ridge is varied: a switchback of small tops, a blocky quartzite summit, challenging rock on the pinnacles, easy walking along a cliff edge above spectacular Coire na Caime. The pinnacles are not the hardest in Scotland, but perhaps they are the most enjoyable for the average scrambler. And so on… A hill to dream about.

The Torridons are an incomparable group of at least 8 hills, between Loch Maree and Loch Torridon: the big three are Liathach, Beinn Eighe and Beinn Alligin; other significant hills are Beinn Dearg, Baosbheinn, Beinn an Eoin, Meall a’ Ghiuthais, Beinn a’ Chearcaill.

The best group in Britain? The Skye Cuillin might argue with that, but only if “best” is defined as “most exciting”. The Torridons are uniquely photogenic thanks to the isolation of each hill, and in good weather there is nothing to beat a day spent among or on them (and do choose good weather!). Glaciation has worked wonders here, sharpening the ridges, carving out spectacular corries and deepening the glens which separate the hills; but then it had a perfect medium in which to work, the lovely Torridonian Sandstone.

W.H. Murray in Highland Landscape, his survey of the Scottish Highlands, judged that “Glen Torridon, its loch, and the mountains to either side, display more of mountain beauty than any other district in Scotland”.

The picture at the top of each page of this website is a 180° view from the western top of Liathach.

This is a whole range of tops, mostly pale quartzite which accounts for the rather un-Scottish appearance of the hill and gives rough walking in ruggedly impressive scenery. The best known feature is Coire mhic Fhearchair with its 350m Triple Buttress; it is often claimed to be the finest Scottish corrie.

In the Liathach class: a beautiful, impressive, varied and totally enjoyable hill. It has great  views because of its isolation and nearness to the sea; it has the Horns, a delightful pinnacle ridge; it has the remarkable Great Gash (or Black Notch), from which fell the biggest rockfall in Britain. And it has no quartzite, so the walking is delightful!

Two feet short of being a Munro! A challenging hill to climb, but a fine viewpoint in the middle of the Torridons.

A major ridge with four tops whose north end is seen not far from Gairloch. It gives a long but very rewarding day’s walking.

An easier hill, making a fine walk along a broad ridge with good sandstone to study and a lofty summit. It involves quite a long walk in from the road.

The easiest Torridon hill, reached from the Beinn Eighe National Nature Reserve’s Mountain Trail, a remarkable path taking walkers up onto the quartzite. The hill is geologically interesting because it seems to be upside down.

Much more interesting than it looks, if you like Torridonian Sandstone: wonderful exposures, and an unusual summit (right).

There are no hippos on Beinn a' Chearcaill.

In Africa there are hippos in pools and rivers,

showing only their goggle eyes above the surface.

On Beinn a' Chearcaill in April, like miniature hippos,

showing only their goggle eyes above the surface,

croaking and splashing in snowmelt pools,

Round their horizon circle the higher hills,

Magnificent, but frogless, and the frogs have eyes

unseeing at hills and hippos, then turn back

to each other and resume their interrupted croaking.

But there are no tourists on Beinn a' Chearcaill:

only the frogs and I, and the eagle high above. 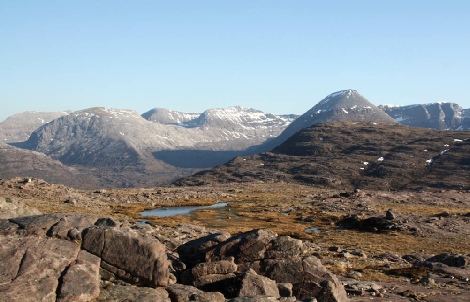 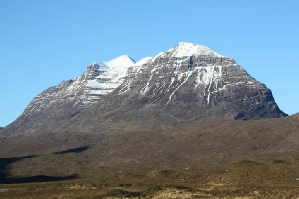 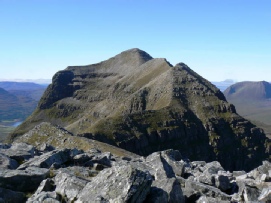 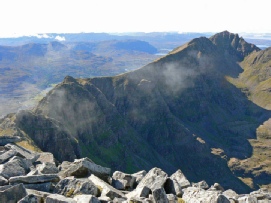 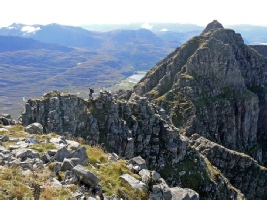 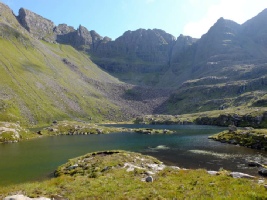 The other side: Coire na Caime

The summit from the east end

From the summit; Beinn Eighe beyond 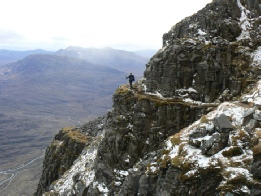 There’s a pinnacle bypass, but…

West from the summit 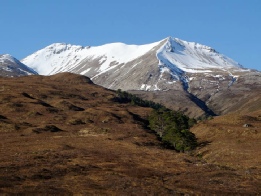 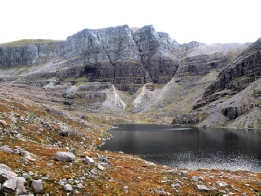 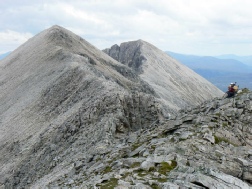 Quartzite on the ridge 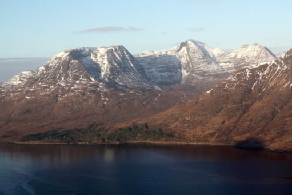 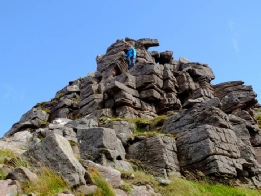 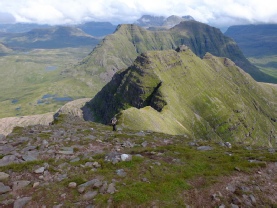 The two Munros and the Horns

View east from the summit 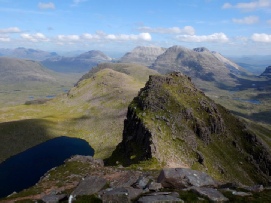 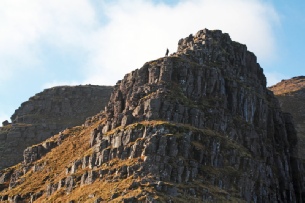 East from the summit 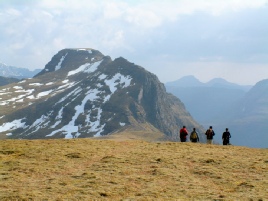 The summit from the north ridge 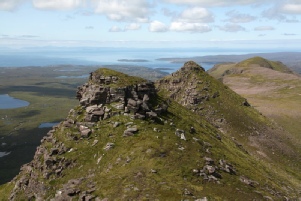 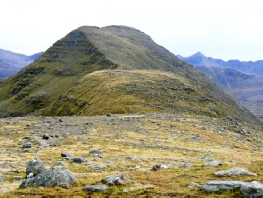 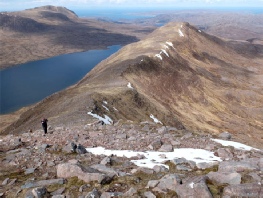 Towards the summit pyramid

… And back along the ridge 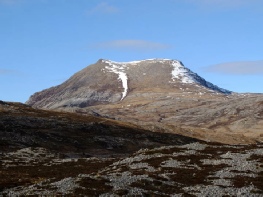 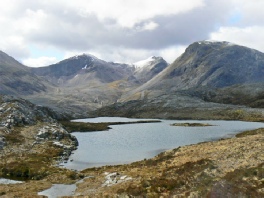 The slopes up to the summit

The back of Beinn Eighe from the Trail 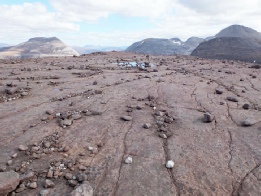